Women make up almost half of the agricultural labour force in developing countries (43 per cent according to UN Women data). Yet, the general perception is to think of only men as farmers and refer to farmers who are women as a “women farmers”.

A recent FAO report stated that on the global scale women produce more than half the world’s food. Why, then, are they not equally represented on boards of producer organisations in India? Here’s why, to name just a few reasons:

1.    Women in India rarely own land. Consequently,they are linked neither to ownership of the crop produced nor the family land.

2.    The role of women in society and sociocultural norms often pose as a barrier in women being elected as leaders.

3.    Many women are reluctant to voice their opinions even as they continue to do the majority of unpaid farm work.

On International Women’s Day, meet Fairtrade Farmers of India – women who have fought legal, social and cultural obstacles to bring about significant social and economical reforms in their communities.

At 37, has been a member of Chetna Organics, a Fairtrade India certified producer organisation since 2007. A tribal Girijan farmer, she was elected Sarpanch of eight villages with over of more than 2,000 Fairtrade farmers. Padma Bai with her husband.

In 2013, Padma Bai used a Rs. 30,000 loan from the Fairtrade Premiums Committee to start a Custom Hiring Centre under the guidance of Chetna Organics. Her venture involves investing in drudgery reducing tools such as pick-axes, sickle, spades, hoes and wheelbarrows that the Centre lends to farmers in neighbouring villages who cannot afford them, at a marginal rate of Rs. 2-5 per day.

Padma Bai has also built cement roads in three villages and one fair weather road with dry mud. She has got government sanctions to make ponds for rainwater harvesting and made clean water available in the village school through a water pump.

Her husband Atram Rajeshwar, a field assistant at Chetna Organics could not be more proud of his wife’s achievements. “Women can influence laws better. I’m very proud of her”, he says. Today, he borrows money from her that here turns with interest instead of approaching local moneylenders with their notoriously usurious rates.

At Fairtrade India, this is women’s empowerment.

Board Member of Pragati Cooperative

Lingu Bai told me that if I were a designer, she wouldn’t speak to me. Yashoda, a water-shed expert, rushed in to introduce me as a Fairtrade India member. With that, she instantly opened up her home to us and welcomed us with a cup of tea made from the root of an indigenous plant from her cotton and food crop farm.

Lingu Bai started a poultry business, Rainbow Roast Chickens, with an interest-free loan of Rs. 40,000 from the Fairtrade Premium Fund. She makes the feed for her chickens with a mix of jowar, maize, and algae from her fishpond. Her massive chickens earn her Rs. 60,000 every four months, enabling her to repay her loan and now own a highly profitable business. Lingu Bai is on the board of Pragati, one of 12 cooperatives established by Chetna Organics. Farmers in her women’s self help group (SHG) make natural fertilisers for organic farming and brooms during the season when raw material is available in the forest.

Each woman can make up to 20 brooms in a day and the brooms earn them a profit of Rs 20 each, contributing significantly to their financial independence and decision making power.

As recently as about a year ago, men, women and children who migrated from the rural Odisha to work at brick kilns in Andhra Pradesh, were trapped into bonded labour and slavery. Those who tried to escape were tortured and their hands mutilated to set an example for others who might dare to attempt the same. 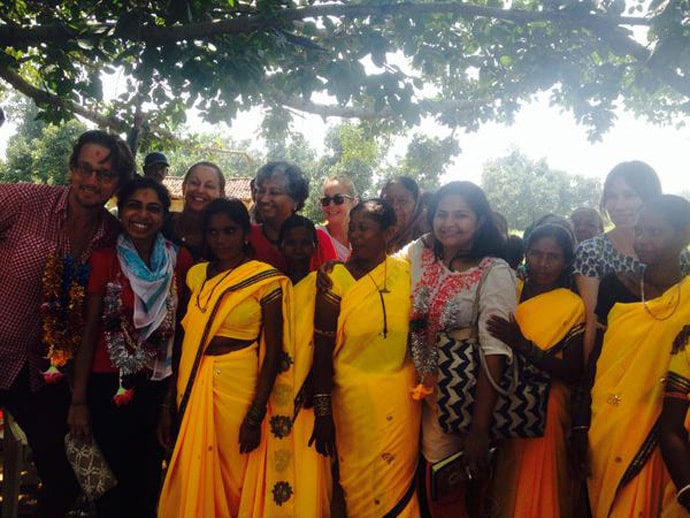 To resolve the problem, a group of Fairtrade SHG women worked with VK Pati of the Pratima Organic Grower Group (POGG) to start their own brick kiln with a bank loan of Rs. 33,000. They now supply bricks to the Indira Awaas Yojna, a social welfare flagship programme by the Indian government to provide housing for the rural poor in India.

The initiative has earned over Rs 1,00,000 in four months. These women were trained to utilise their clay brick making skillsduring the season when they cannot farm their cotton and there are fewopportunities to earn an additional income.

To honour their path-breaking community work, the Block Development Officer presented the group with yellow sarees that have earned them the moniker of  “Yellow Saree Women”.

I met Shobhana for the first time at the Fair Trade Alliance Kerala (FTAK) Seed Festival in 2014. She had come to Kelakam with other farmers from her panchayat. Their all-women stall had a board that said “Gender Justice”. 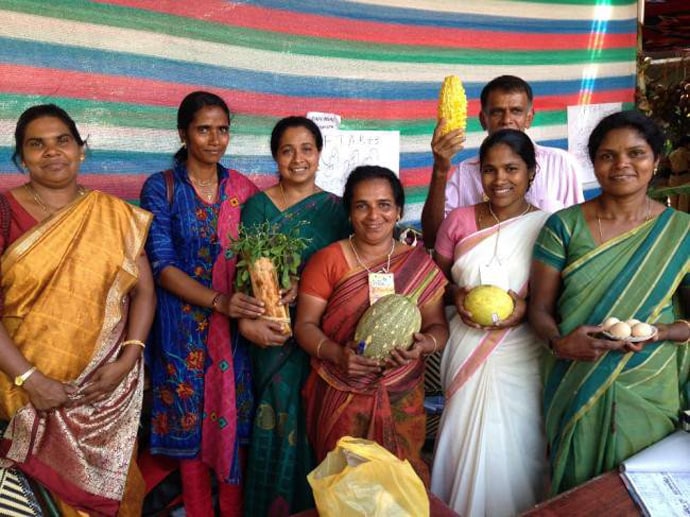 Shobhana has been working to protect biodiversity and travels to different villages exchanging seeds to protect what matters most to her. When I asked her what gender justice meant to her, she said, “For the first time in my life, I am travelling for work while my husband is taking care of the kids. For me that is gender justice”.

Shobhana and her associates have also launched a seed bank with Fairtrade Premiums and contribute to the newly launched seed wiki by FTAK. At every seed fest, these women exhibit 26 varieties of chilies and other seeds, laid out with pride. The group also makes pickle to supplement their earnings.

FTAK has been empowering its farmers by teaching them about gender equality, protecting bio diversity and ensuring food security. It has worked significantly over 10 year assuring more than 5,500 farmers obtain a fair price for their produce.

54 years old, Paneerselvam has been living in the Bombay Burmah Trading Corporation (BBTC) tea estates for the past 35 years and has been a permanent employee for 28 years. She lost her husband six years ago and all her three sons have left to work in the cities. Her Fairtrade Premium Committee receives a premium on sales of tea, which has been utilised to provide scholarship for kids, notebooks for students and smokeless stoves for the estate workers.

She has won several competitions over the years, and runs with a heart full of love and happiness.

This International Women’s Day, Fairtrade India salutes the spirit of these women. We aim to reduce gender gap in the farming communities further and empower more women to take control of their lives and set examples for others in their communities.